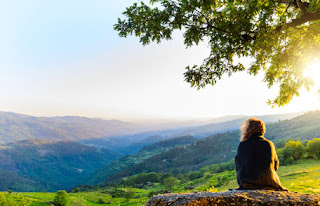 A hungry beggar walked up to a well-dressed plump man shopping on Rodeo Drive and said: "I haven't eaten anything for several days." Walking past him, he replied , "God, I wish I had your willpower."

Biases - everyone has them....
They are predispositions for or against a person, place, thing or idea. They interfere with or impair our judgment and, often times, our own success. Here's an example of that:

At 7:51 a.m. on Friday, January 12, 2007; in the middle of the morning rush hour, a youngish white man in jeans, a long-sleeved T-shirt and a Washington Nationals baseball cap entered the L'Enfant Plaza Metro subway station in Washington DC. From a small case, he removed a violin. He placed the open case at his feet and threw in a few dollars and pocket change as seed money. He then swiveled it to face pedestrian traffic and began to play. In the next 43 minutes, as the violinist performed six classical pieces, starting with the 14 minute quite difficult piece, the Bach Chanconne. 1,097 people passed by. Almost all of them were on their way to work, mostly government jobs.

If you were there, what choice do you think you'd make:  Do you stop and listen? Do you hurry past with a blend of guilt and irritation, fascinated by the music yet annoyed by another demand on your time and wallet? Do you throw in a buck, just to be polite? Does your decision change if the performer is bad? And what if they are really talented? Do you have time for beauty in your daily commute? Shouldn’t you?

This gentleman made about $40 for the time he played. Unbeknownst to all but one of those 1100, it was a performer who it has been said, “plays like God.” He was playing on a $3.5M Gibson ex Huberman violin, handcrafted in 1713 by Antonio Stradivari, and can usually command $1000 per minute for his internationally known talent. He was Joshua Bell.

How many Joshua Bell's have you missed in life?


People see what they want to see and what people want to see never has anything to do with the truth.  ~Roberto Bolano, Chilean novelist

Our theme of year is Perception. We will explore what they that is, what perspectives are, how they got there and what to do with them. Perception flavors our belief and thus our experience. Our January theme is ELEMENTAL LIVING, the basics of life.


Aristotle believe that all the matter in the universe was made up of four basic elements, earth, air, fire, and water. These elements were acted on by two forces: gravity – the tendency for earth and water to sink, and levity – the tendency for air and fire to rise. This division of the contents of the universe into matter and forces is still used today.   ~Stephen Hawking, A Brief History of Time

And this week we are exploring the AIR. There are five aspects to explore.


At this moment, you are breathing some of the same molecules once breathed by Leonardo da Vinci, William Shakespeare, Anne Backstreet, or Colette. Inhale deeply.   ~Diane Ackerman, The Natural History of the Senses

1) It can be enjoyed by all the senses
The air is all around us, can't exist without it. And I am not just talking about oxygen.


The air is always vibrant and aglow, full of volatile gases, staggering spores, dust, viruses, fungi, and animals all stirred by a skirling and relentless wind.          ~Diane Ackerman, The Natural History of the Senses

I am also talking about things like thoughts, they exist in the air, whether from the consciousness of the human race in general, the news, your history, or your community and like-minded friends. Some are clean and fresh, and some are tainted and polluted. We get to choose which to keep and which to lose.

When we say our distant ancestors crawled out of onto the land, we forget to ad that they really moved from one ocean to another, from the upper fathoms of water to the deepest fathoms of air.  ~Diane Ackerman, The Natural History of the Senses

By the way, that book I just quoted from three times is a fabulous  and delicious poetic treatise on our senses. HIGHLY RECOMMEND!

2) Breath
We use our lungs to inhale/exhale life. I frequently use the affirmation, "God Is" on the inhale and "I Am" on the exhale to help center and ground myself. Breath is a spiritual practice unto itself when we intentionally sit aware of its movement in our bodies and its effects on our inner environment. We use mind, heart, and intuition to breathe in the air of prosperity or lack, love or hate, faith or fear. The choice is ours.

3) Lightness of Being
Quick story:
Former aerospace engineer Marion Franklin Rudy introduced the air innovation to Phil Knight in 1977 of  placing tiny air bags in the soles of shoes to soften impact. The first shoe to incorporate Air cushioning was the 1978 Nike Tailwind runner, which grew in popularity as researchers at the University of Tennessee discovered that athletes used less energy when running in the Nike Tailwind compared to other conventional running shoes.

What do you do to use less energy, but stay energized? Like the Nike shoe, we too have tools inserted in our very selves to do that; to feel free and peaceful, like surrender control, trust our intuition, show compassion and kindness to our self and others, and believing the simple truth:  I am enough.

4) Air is also the word for a song or aria
Air is also a French music duo from Versailles, consisting of Nicolas Godin and Jean-Benoît Dunckel. Air's critically acclaimed debut album, Moon Safari, including the track "Sexy Boy," was an international success in 1998. Its follow-up, "The Virgin Suicides," was the score to Sofia Coppola's first movie. A little fun fact.

What song do you sing? How do you express/voice your self and your Self (the Divine within)? What words are you using a lot? The words you say to your self, your self-talk, says a lot about your perspective and perception of you and the world. For what you can perceive, you can achieve!

5)  Your air is the general impression, manner, look, aspect, atmosphere (perception theme) you convey; what you take flight from, through and as.
Truth is universal. Perception of Truth is not. Just like you want clean air in your lungs, so too do you want it in your heart, mind, intuition, thoughts, feelings and beliefs. We must ventilate the negative and circulate the good in mind and action. But...

Let us do our ventilation through revelation. Clear the air. Breathe the air of Truth. Put on your best air of the Divine You. And dive into the air of joy, success, vitality and opulence.

That is the way of elemental living in air.

Affirmation
HELLO 2020
I know who I AM and the Power I embody. I use it to create my abundant prosperity, creativity, vitality, relationships....EVERYTHING! Anything that thinks it can get in the way of that is nulled and voided. I say bye-bye to mental  junk, gunk and muck.
I declare, soar, zoom, sing, transcend, transform and generally do the success dance for this opulent year.
Posted by New Thought Guy at 7:05 PM