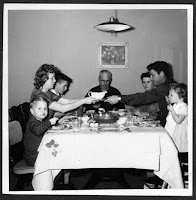 
Spring has sprung, holy days are abundant, the daytime is longer and though it feels like we have lost some freedoms, it actually a perfect time to get free from old thought patterns, beliefs and ideas that have limited our experience and expression as an individual and as people. The above is a Biblical command from Leviticus talking about celebrating Passover or Pesach, the holiday which commemorates liberation, emancipation, and communal responsibility for oneself and the world.

Let's begin with the story of Passover:

There was once an orphan, husband, father of two, shepherd, defector, murderer, and possible stutterer... our hero - Moses.

One day, Moses was shepherding his flock of sheep in the desert, when suddenly he came upon this bush... on fire … a burning bush, you might say. In fact, it was a talking burning bush, and it made you take your shoes off while on its property.

It told Moses, “look, I see what’s happening to the people, the Hebrews, I hear their cries. I don’t like it and I need you to fix it. Go tell the Pharoah, ‘let my people go!”

Moses was like, “Uh...well...ummm, hold on,” he was freaking out a little – this was a task out of his comfort zone. “Nobody is gonna believe me. Who could I say sent me to insist on such a thing?”

And the scorching shrub told him, in a very God-like voice, “tell them ehyeh asher ehyeh -I AM that I AM- sent you. Go, speak your Word, Moses, and free your people. I am within you to support you with the Power that you need.”

Very impressive speech by the blazing bush, especially with the dramatic echo, but nonetheless, our hero was still weary about this task, not believing the Universe had his back. Who hasn’t felt that at times? You stand before a conflagrant conversant chaparral ... who would believe such a thing?

“Are you out of your Mind?,” Moses answered, “Pharaoh is going to have a conniption ... he's not gonna care that 'I AM that I Am' sent me to tell him to ‘let my people go.’ Come on now!”

The Bush replied, “You come on now, doh-doh head,  step it up a bit.  At least, act as if, Moz.”  Then the Infinite Being showed Moses that he had a few talents that he didn’t know he had, to prove that he could represent the Divine that was within him.  It was the old stick into a serpent trick….very impressive. Great with the ladies. Some people are good singers, good with numbers....Moses:  a stick and a snake!  Don't laugh, the Universe is unlimited!

Still not convinced, our little 80 year old rascal (yes, he was 80 at the time) brought up another one of his limiting beliefs, surely, he thought, a detriment to this whole affair. “Hey Lord, what-a-bout my uncircumcised lips?” Hey, its in the Bible; Moses had some sort of speech impediment, as well as a social awkwardness. “ I'm good with sheep,” replied Moses, “but people?  My brother Aaron is the charismatic one.”

“Look, said the heated hedge, “have a little faith, dude. I'm giving you this job because of those things. If I sent some big handsome guy with booming stentorian tones....say...Charlton Heston....everyone would believe for a minute or two, but it's too showy.  They need to be wowed by my energy, manifest through a regular guy. They need to see the vibration of my luminescence-in-action that is within you, to learn that it is within them. The Hebrews just don't get that yet. They will believe it more, if you show them.  And remember, 'I’ll be there’ … ‘you just call out my name' ... Cause Moz, 'you gotta friend in me.”

Still, Moses was not convinced.  Have you ever had that?  In retrospect, can you see signs from the Universe showing you the next step … and you didn’t listen? I don't have the time to list mine.

Anyway, Moses told the bush that he wanted to have his people free, but wasn't feelin' this 'Power within' thing quite yet. So, the Universe, in its flaming Cause and Effect splendor, says, “Geez, okay, if you really want to do it the hard way, fine, whatever. But you gotta....♫Go down, Moses, way down in Egypt land, and tell O' Pharaoh, let my people go.♫ You will get the Hebrews freed, I promise, but if you're so set on it being a difficult thing, then, okay, I'm gonna harden Pharaoh’s heart and make it more difficult for you.  “What,” cried Moses?  “Hey pal, you ask, you get, my friend. Happy now?  Have fun!  Move it along, we're done here.”  Lesson:  if you think life is going to be difficult, the Universe is happy to oblige.

Anyhow, Moshe (his Jewish name) returns to Egypt, starting to feel pretty good now. He goes to the Pharaoh, with full Divine strength surging through him and demands, “Let my People go!” And the Pharoah says, “naw, I don't think so.” This goes on for days.

The serpent and stick bit didn't impress him, the 'I Am that I AM' stuff didn't impress him, even the 'let my people go' song didn't do it; so Moses had to get creative. Thus, the ten plagues.  Now, each plague meant something, and we continue to have some of our own, above and beyond Covid-19, but most important to the story is that the Hebrews were in bondage-physically, emotionally and spiritually. They were accepting their strife as their truth, not just fact, thus making it harder for them, and any of us in a similar limited belief, at home, to get outta there. Race consciousness can be a tough vortex to transcend, if you buy into it. The Hebrews didn’t understand that they were the true Power over their lives, not Ramses II or Thutmose III (whoever was the Pharaoh – Yul Brynner).

Finally, the Israelites fled. So these 2+ million people who have been in bondage for over 200 years  ...doesn’t some of your limiting beliefs seem like they have been around that long(?)...  they come all this way, over 100 km, out of misery, out of oppression, finally on their path to the Promised Land and suddenly they hit a little wall - a wall of water, yes - but now all that faith goes in the toilet.

Scouts say Pharaoh and his army (their past) is on their tails, and what do the Hebrews do? They plead for help … again! They whine and bitch & moan & cry about the obstacle, the setback. They're all “woe is me” and so, of course, boom, that manifests:  the Red Sea.

But Moses is a spiritual, Christ consciousness activist kind of guy now. He knows, in every cell, that, even on this special occasion, Principle works.  He evolved by involving – reaching within to the Power of Divine Intelligence....the I Am that I AM – hello!  And he spoke his word and the Red Sea parted, and they crossed, for six hours, and then the Red Sea un-parted; leaving behind, drowned, dead and buried; a huge chunk of limiting beliefs...the Egyptians soldiers. But that wasn't the end, it was actually just the beginning. Unfortunately, it took another 40 years of wandering for the Hebrews to reach the promised land of really getting it, the Divine is within.

The real exile of Israel in Egypt was that they learned to endure it. It was easier to take the Jews out of Egypt than to take the Egypt out of the Jews.  ~ Rabbi Hanoch of Alexander, a Hasidic master

Often, we move away from negative situations, then recreate them. That's because there's a deeper dynamic that got us there which hasn't really shifted yet. The outer circumstances may have changed, but the inner landscape hasn't. We know that Principle is not bound by precedent, but in some parts of our lives, we, like Hebrews, don't get it. We hold habits of being enslaved, even when free. Well Principle is always present to use for our greatest good or not so good. We get to choose.  Here's an example how:


If I take the time, to just sit down, close my eyes, say a prayer, open myself to spirit, then my identity begins to expand, and I remember that I'm not just Estelle, the personality, that I'm a soul, that I'm an embodiment of the Divine, and I move from what Jewish mystics say is "small mind" to "big mind." And in that other state, the bonds of the self, the small identity that limits us and dictates who we think we are, it frees up -- it's sort of like a zooming out that you would do with a camera, but it's zooming out all the way to infinity, all the way to eternity, beyond time, beyond space. And in that moment of deep meditation, or prayer, anything becomes possible, because you are rising above the workings of time.   ~Estelle Frankel, Berkeley psychotherapist / Jewish mysticism educator

That zooming out concept is a NLP exercise, as well.

There's a saying at end of the Passover dinner:  le-shanah ha-ba’ah bi-Yerushalayim .... next year in Jerusalem!  Yerushalayim means City of Peace. It is the city of peace that is within each and everyone of us, the Universal unconditional Divine Love and the Law that says thoughts become things, feelings spark facts, beliefs manifest biography.

The Passover biography shows we must be our own Moses, our own Redeemer of the Truth and not allow ourselves to become bitter or hold on to the past, hardening our hearts like Pharaoh.


TRUTH is within ourselves; it takes no rise
From outward things, whate’er you may believe.
There is an inmost centre in us all,
Where truth abides in fullness; and around,
Wall upon wall, the gross flesh hems it in,
This perfect, clear perception—which is truth.
A baffling and perverting carnal mesh
Binds it, and makes all error: and, to KNOW,
Rather consists in opening out a way
Whence the imprisoned splendour may escape,
Than in effecting entry for a light
Supposed to be without.  ~Robert Browning, Paracelcus

I invite you to:

Not next year, not even sometime this year…

Affirmation
Principle Works, Even on Special Occasions
I Am a special occasion.  I Am an unique expression of Divine origin. I Am sitting in a pool of grace, allowing Divine Intelligence to inform me and Divine Healing to protect my body temple.  I Am open to and use this Force for Good for the prosperity, joy and Love of myself, my family and friends, and the world. I am never passed over for the good in my life. I sing the songs of the ancients and speak the words of the wise.
Hallelujah, amen, shalom, aloha, and so it is!
Posted by New Thought Guy at 1:56 PM